All About French Wine: The 9 Famous Wine Regions in France (Map)

France’s reputation as the world leader in fine wine is earned because French winemakers have spent centuries cultivating the grapevine and paying attention to the minute differences among wines made from various plots of land. France remains one of the top wine producers, with wines of every style and quality level coming from hundreds of unique appellations across the country.

The History and Origins of French Wine

Winemaking existed in France for centuries before the Roman conquest, but the Romans were responsible for planting vines across France in the wine regions we know today. France has dozens of native grape varieties, many of which have become popular worldwide, such as cabernet sauvignon, chardonnay, pinot noir, and sauvignon blanc.

The Roman Catholic Church was a major player in keeping winemaking traditions alive during the Middle Ages. Monks in Burgundy noticed that different soil, climate, terrain, and winemaking techniques all worked together to create wines that tasted different, and France’s idea of terroir was born. These monks experimented to find out which vineyard sites made the best wine, which laid the early foundation for France’s appellation system.

Wine quality in France continued to improve over the following centuries as winemakers and scientists learned more about vineyard management and fermentation, and production increased to meet international demand for French wine. This progress came to a standstill in the mid-1800s when a tiny vineyard pest called Phylloxera arrived in Europe from America. The aphid destroyed over half of the grapevines in prestigious areas like Bordeaux, and the only solution was to rip up whole vineyards and replant them with new vines grafted to Phylloxera-resistant American vine rootstocks.

After rebuilding from Phylloxera, a huge step forward for French wine was the establishment of the Appellation d'origine contrôlée (AOC) system in 1935. The French government put rules in place about what grapes could be grown in certain areas, as well as how wines could be made if they wanted to wear the name of a given appellation. The AOC system gave consumers more information about the wine they were buying and raised quality levels of French wine across the board. Wine-producing countries across Europe and the New World have since adopted similar systems.

The 9 Main Wine Regions in France 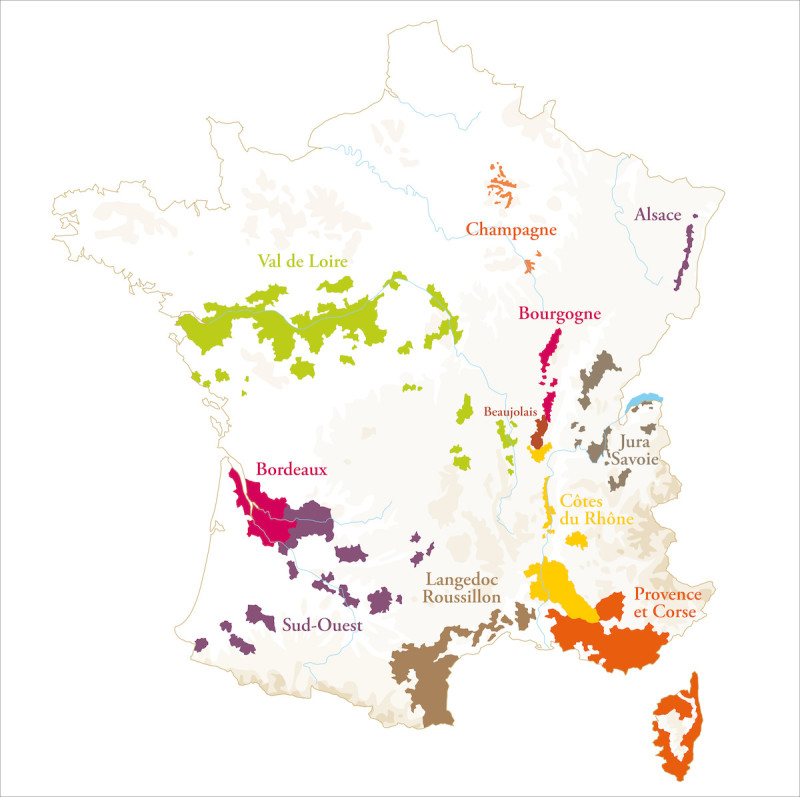 French wine regions are scattered in all corners of the map of France.

France shares borders with other winemaking countries including Germany, Spain, Italy, and Switzerland.

The Basics of Bordeaux Wines

Bordeaux, in southwest France, is primarily known for blended red wines driven by cabernet sauvignon on the left bank of the Gironde River and merlot and cabernet franc on the right bank.

The Basics of Burgundy Wines

Burgundy, located between the gastronomic hubs of Dijon and Lyon in eastern France, is dominated by pinot noir and chardonnay. Unlike in Bordeaux, the best vineyard sites may be split up among many small winemakers. Winemaking estates here are called domains.

The Basics of Wine From the Loire Valley

The Loire region is defined by the Loire River, which flows from the center of the country to the Atlantic Ocean. This large region grows dozens of grape varieties on many types of soil. From east to west, four sub-regions sit along the river valley: the Central Vineyards, Touraine, Anjou-Saumur, and the Pays Nantais.

The Basics of Champagne

Champagne is France’s northernmost wine region, located just east of Paris along the Marne River. At this northern latitude, grapes struggle to ripen, so the dominant wine style is sparkling, in which acidity is a virtue.

Learn more about Champagne wines in our complete guide here.

The Basics of Wine From Alsace

Alsace is located east of Champagne between the Vosges Mountains and the Rhine River on Germany’s border.

The Basics of Wine From Rhône

The Rhône valley runs from north to south along the Rhône River in southeastern France. It encompaces two fairly distinct regions, each with different climates and grapes.

How to Select Smoking Woods: 7 Types of Wood for Smoking

What Is Sous Vide Cooking? How to Sous Vide and Easy Sous Vide Short Rib Recipe

Music 101: What Is Legato? Learn What Effect Legato Has on Music and What You Need for Good Legato Technique